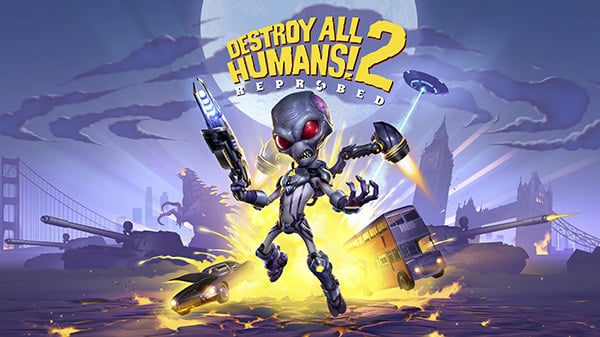 That’s right, earthlings, Crypto is back and this time, he’s invading the swinging sixties!

After the KGB blew up his mothership, Crypto seeks revenge and travels to iconic places in the United States, the United Kingdom, the Soviet Union, Japan, and even to the Moon!

Destroy All Humans! 2 is a full remake of the original game, adding and improving features while (re-)building the game from scratch in shiny Unreal Engine 4 visuals.

The game is developed by Black Forest Games who successfully re-launched the Destroy All Humans! franchise in 2020 and is in development for PC, PlayStation 5, and Xbox Series X|S.

Crypto is back with a license to probe. The alien invader returns, groovier than ever. Experience the swinging ’60s in all its chemical-induced glory and take revenge on the KGB for blowing up your mothership. You’ll have to form alliances with members of the very species you came to enslave.

Watch the announcement trailers below. View the first screenshots at the gallery. Visit the official website here.