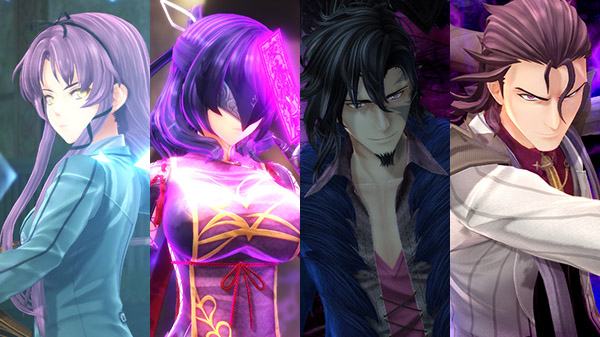 “As school council president, this is an easy task especially for my juniors.”

A second-year exchange student who attends Aramis High School. She is the invincible president of the school council who can handle any kind of situation with ease.

She used an exchange student program from Liberl’s Jenis Royal Academy to come to the Republic in the spring of Year 1208.

She met Agnes immediately after she came to the Republic, and since their rooms are right next to each other in the dorms, they have naturally become close.

Although she is making impressive results as school council president, she seems to have a different reason for coming to the Republic.

“I will follow through with my way, for my past home, and my home now.”

A legendary assassin nicknamed “The Shadow of the Easterner Quarter.”

She always has her face covered with a mask, and wields a demon-slaying sword larger than her own body.

She used to have a contract between with Heiyue and operated mainly in the Easterner Quarter, but changed her base of action to Crossbell as of a few years ago, which made any rumors about her fade away.

She has been away from Calvard for long, but has once again signed a contract with Heiyue to stop any damage to the Easterner Quarter caused by the mafia organization Armata.

“Don’t make me say it. Of course its because it’ll be more ‘interesting.’”

Enforcer No. IV of Ouroboros, who crowns the title “Outlaw of Thousands.”

He uses a mysterious power that can rot away even demons in purgatory.

Like Lucrezia, the “Golden Butterfly,” he also was part of an assassin’s organization known as Order of the Moonlight Horse.

After fighting with Ouroboros, Harwood decided to join them and was given the role of Enforcer by the Grandmaster.

Having studied and practiced the evil deeds of all ages and places, he is a criminal specialist who acts according to his own desires, but it is said that a “certain plan” of Ouroboros is related to his movements within the Republic.

“What’s the matter, spriggan? Is that all to your nightmare?”

The boss of mafia organization Armata. He commands an overwhelming aura that feels as if he can make anyone obey him.

Gerard made the organization what it is now by killing his former boss Enrique when the boss mishandled some matters.

He thinks fear is what makes people human, and that everything can be controlled by it. He gained many followers by recruiting strong fighters that resonate with his philosophy.

Other organizations in the Republic have caught on to Armata’s suspicious behavior and already started to take countermeasures, such as the Bracer Guild, the police, and even underground organizations like Heiyue.